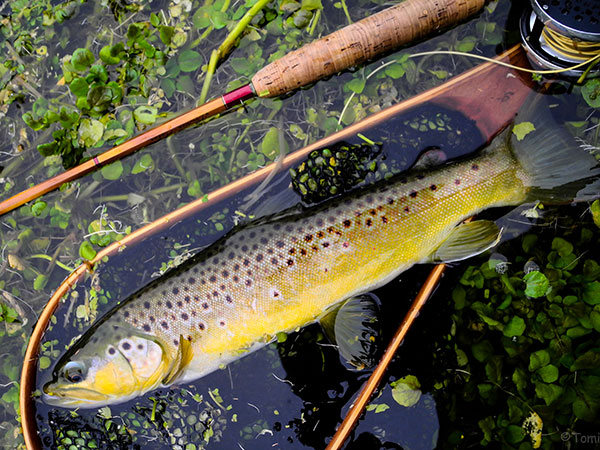 Effective February 18, 2006, the PA Fish and Boat Commission (PFBC) approved the addition of 3 miles of Letort Spring Run, from Post Road Bridge downstream to the mouth at the Conodoguinet, to its list of Class A Wild Trout Streams.  It is the Commission’s policy to manage self-sustaining Class A wild trout populations as a renewable natural resource with no stocking and to conserve that resource and the angling that it provides.  Class A wild trout populations represent the best of this Commonwealth’s naturally reproducing trout fisheries.  It is expected that the Pennsylvania Department of Environmental Protection will upgrade this section from Cold Water Fishery to High Quality – Cold Water Fishery based on the presence of a Class A wild brown trout population, providing additional protection to this water.

In 1981 a sewage treatment plant discharge was relocated from Letort Spring Run to Conodoguinet Creek.  Surveys in 1984 and 1985 documented a low-density wild brown trout population that was not capable of sustaining a significant fishery.  CVTU members then annually stocked 9,000 fingerling brown trout provided by PFBC.  By 1999 water quality and habitat had recovered, and brown trout reproduction was sustaining the population, therefore the fingerling stocking ended.

Early in 2002 CVTU completed the restoration of a 1,000 ft. section of severely degraded stream habitat downstream of Shady Lane.  The project included a new meandering channel within the existing wide channel, installation of rock vanes, overhanging bank cover to provide supplemental habitat, gravel spawning areas, and riparian plantings.  This area had been identified as a high priority during a CVTU watershed assessment project.  The assessment, design, and construction were funded by PA’s Growing Greener program.

A survey of Section 05 of Letort Spring Run conducted in early November 2005 documented a wild brown trout population far in excess of the minimum criteria for Class A status.

The Capuano Reach Project enhanced the habitat of a 500 ft. section upstream from the PA Turnpike bridge.

The in-stream work of our Shady Lane project is now complete.  There is lots of new structure and habitat and it’s amazing to already see gravel where there was once “muck”.  The trout are already back in place – even evidence of young of the year.  This will be an interesting place to fish.  Go have a look and see what you think.  The “Shady Lane Project,” which included an assessment of the entire watershed, is funded under a PA Growing Greener Grant.