One Path – The Race to Save Mongolia’s Giant Salmonids

One Path – The Race to Save Mongolia’s Giant Salmonids 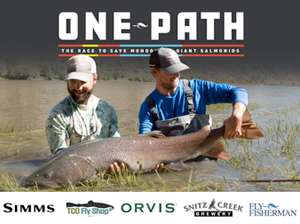 The East Coast premiere of the documentary film One Path: The Race to Save Mongolia’s Giant Salmonids will take place at Snitz Creek Brewery Tasting Room located in Palmyra, PA on December 15th at 2 p.m. Ticket proceeds go to benefit (Names of TU Chapters).

TCO Fly Shop, Snitz Creek Brewing & Fly Fisherman magazine are please to bring the East Coast premiere of the documentary film One Path: The Race to Save Mongolia’s Giant Salmonids.

Join Fly Fisherman magazine publisher and editor Ross Purnell as he embarks on an epic journey by horse, camel and raft through Mongolia, the land once ruled by historic warrior and emperor Genghis Khan, in search of the fly-fishing experience of a lifetime and the giant, freshwater salmonid species known as taimen.

Purnell documented his journey in hope of calling attention to the plight of the giant trout-like fish (trout, salmon, char) that face potential extinction from the region because of overfishing, toxic mining practices, along with the construction of roads and dams infiltrating the pristine country and waters that are home to this rare species. Along the way, Purnell and his team also befriended and taught local men, women and children how to fly fish, provided them with equipment and supplied key medical and dental provisions to aid the Mongolian nomadic people who live along the rivers.

“This experience is the culmination of a dream of fly-fishing for this elusive apex predator in its natural environment of Mongolia, as well as call attention to the real conservation issues facing the species, educate tribal villagers living along the rivers on how to fly fish and provide medical and dental aid to this somewhat forgotten group of descendants from one of the world’s once most powerful and historic empires,” Purnell said.

The film premiere of One Path: The Race to Save Mongolia’s Giant Salmonids also is a celebration of Fly Fisherman magazine’s 50th Anniversary of publication. All ticket proceeds from the event premiere will go to Doc Fritchey TU, Cumberland Valley TU & Donegal TU Chapters. Along with the film premiere, there will be raffle items from Simms, Orvis, TCO & Snitz Creek Brewery; and much more.